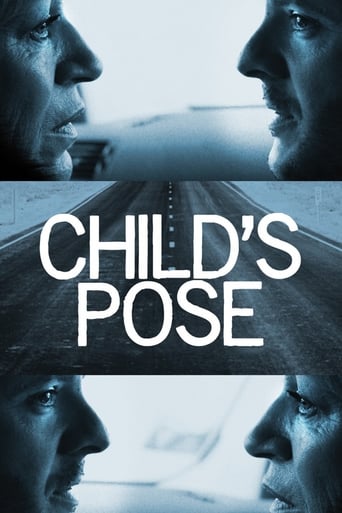 &nbspThe movie Child’s Pose speaks with emotion, but also with humor, about the relationship between a domineering mother and her adult son. Child’s Pose is a drama film about the traumas of suffocating children through love, about the scars that parents leave on their children’s personality and life.

&nbspThe movie is a radiograph of the contemporary Romanian upper class, presenting the influence traffic and corruption at small level in the basic institutions of society and their extensions on the entire socio-economic system in Romania today.

&nbspCornelia is a possessive and authoritarian mother who fights hard to save her only son who recklessly killed a child in a car accident. The character Cornelia is played by Luminita Gheorgiu who is known to the international public as the nurse in “The Death of Mr. Lazarescu” (2005). Barbu, her son risks between three and fifteen years in prison.

&nbspThe film is harsh without any scenes of violence. We don’t see the accident, we don’t see how Barbu is beaten by the villagers, but the verbal violence with which the characters attack each other is sometimes hard to bear.

&nbspChild’s Pose, directed by Călin Peter Netzer, won the Golden Bear for the best film entered in the competition of the 63rd edition of the Berlinale. A well-played film, with well-defined characters that we recommend. You can try to see if it is available on Netflix in your country or try on kanopy or Fandor.